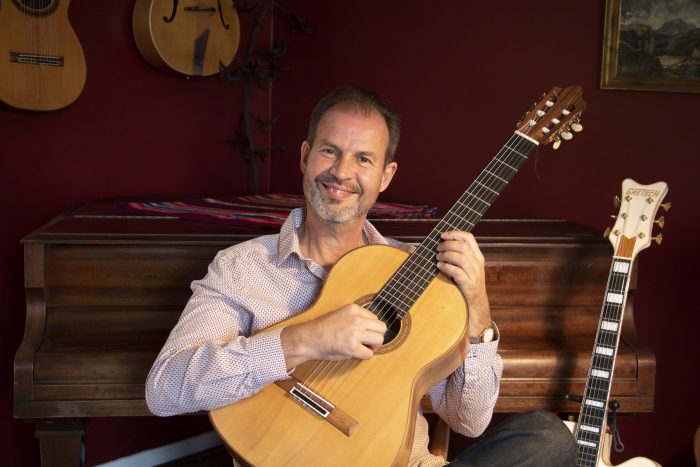 Learn from the best!

Gunter Herbig was born in Brazil and grew up in Portugal and Germany. Influenced by such different cultures and aesthetic languages, he has developed a highly personal, charismatic, and expressive style of playing and performance. The balance of Brazilian sensuousness, intense Portuguese passion and German intellect and finesse is the hallmark of his playing. Since moving to New Zealand in 1989 he has made numerous national concert tours and has a busy performance schedule which has taken him to South America, Central America, and Europe, where he appears as a soloist and chamber musician in concerts and festivals. He has performed on several live broadcasts on television and radio in New Zealand and Mexico and has recorded for a number of film scores and television documentaries.

He served as the Head of Classical Guitar and Chamber Music at the New Zealand School of Music in Wellington and taught guitar performance, chamber music, pedagogy and repertoire studies at the School of Music at Auckland University for 24 years. Gunter’s “New Zealand Guitar Music Vol. III” will be released by Naxos in September 2019. A boundary-breaking recording of arrangements  of Gurdjieff/de Hartmann piano music for the electric guitar was released internationally by one of the world’s leading classical music labels BIS in May 2019.

Guitar lessons from the country’s foremost guitar teacher with over 30 years of experience at all levels.

Lessons are one on one in my house in Hataitai in Wellington or via Skype.

Internationally acclaimed concert guitarist Gunter Herbig has taught at all major university music departments in New Zealand and was invited to teach masterclasses at universities in Argentina, Mexico and Germany. Gunter was Head of Guitar and Chamber Music at the New Zealand School of Music until January 2008 and taught classical guitar performance at Auckland University from 1991 until 2015. Gunter now teaches freelance in his private studio in Hataitai and invites guitarists of all levels to study – the only prerequisite being enthusiasm!

My NCEA performance students have consistently achieved excellence in their NCEA assessments. I am well versed with the curriculum requirements and work closely with their school’s music departments.

Go all the way!

“Gunter Herbig is the guitarist playing G.I.’s work. He chose to play these pieces on the electric guitar. And when you hear it this way, it’s hard to picture it played any other. It’s … perfect. Gunter was born in Brazil, grew up in both Portugal and Germany, and currently lives in New Zealand. Along the way he also visited South America, Central America, Europe, and the rest of the … world. With each step, he picked up an influence, style, or technique for playing the guitar. His playing is truly cosmopolitan, just like the … composer. In his playing there are twangs of the psychedelic, hints of blues, stretches of the sitar, phrasings of Frisell, fucktons of Fahey, buckets of Cooder, lumps of Loren Connors, and traces of modern classical and the (music) feels seamless.

“On electric guitar, Herbig ranges more widely than (Keith) Jarrett… While this may seem an almost academic project – the first such interpretation of Gurdjieff’s music on electric guitar? – this quiet, considered and intimate music never feels like that in Gunter Herbig’s assured and empathetic hands.” Graham Reid, April 2019

“On the whole, this second CD by Gunter Herbig is a masterpiece, as it is very rarely heard in the inexhaustible – almost sprawling – repertoire of guitar music on such a high musical and authentically lived level”

“(Gunter Herbig) is an absolute master of his metier; he performed with dreamlike secure virtuosity, from breathed harmonics to fully realised orchestral flights of an entirely explored dynamic scale”

“His playing is incredible, how can you communicate such power with an instrument just made of wood and nylon strings?

“Gunter Herbig is one of our finest guitarists… The essential character of much of the music on this CD comes from its sounding as if it might have been improvised on the spot. That Herbig has conveyed this impression, with no sacrifice of tonal beauty or structural logic, is a mark of his artistry.” (Five stars)

My son is privileged to be learning the guitar from a gifted teaching and performing professional. We lived in Europe for many years, and when we came back I didn’t expect for my son to have access to a music teacher operating at that level. Thank you Gunter!

Gunter taught our teenage daughter classical guitar. With his tuition she achieved high grades in NCEA 2 & 3 performance music without taking the subject at school. The music she plays is wonderful. Gunter came highly recommended (by another music teacher) and we would pass on our recommendations to anyone.

***** (five stars) I've been enjoying weekly lessons with Gunter for two years and he is the most patient, easy going, funny, flexible and ridiculously talented teacher you will ever find - I recently watched him performing with the NZSO. Regardless of your age or level he will be nothing but encouraging and will patiently bring out the very best in you without pressure. I honestly can't imagine a better teacher.

***** (five stars) Gunter taught our teenage daughter classical guitar. With his tuition she achieved high grades in NCEA 2 & 3 performance music without taking the subject at school. The music she plays is wonderful. Gunter came highly recommended (by another music teacher) and we would pass on our recommendations to anyone.