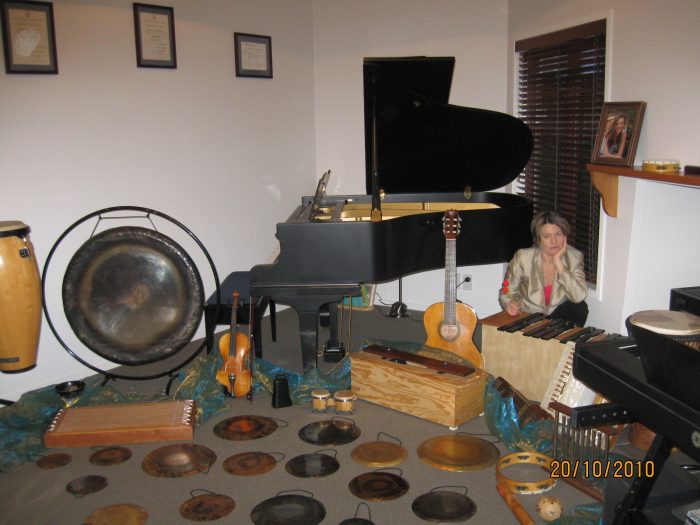 Janet Dudney has opened a new music studio in Taupaki,  just 28kms from Auckland’s CBD.  Surrounded by nature and the sound of bird calls, Janet teaches holistic Piano and Voice Lessons in addition to facilitating Sound Play and Sound Art.

Janet began playing the piano at three years of age under the tutelage of her mother.  In 1972 she graduated from North Shore Teachers College with Distinction, specializing in music.   After three years of class teaching she moved to Wellington to pursue full-time music study.  She graduated with an ATCL and LTCLGMT from Trinity College of Music, London in addition to a Diploma in Executant Music.

In her mid-twenties Janet travelled to London to further her studies in piano and voice.  While in London, she received a scholarship from Mercy College in Detroit.  She settled in America and lived there for thirty years as a teacher and parent, music director and performer.  She has returned to NZ bringing a wealth of experience and a creative approach to music education in general.  As one of her colleagues wrote:

“Janet is simply amazing.  She possesses a unique way of reaching to the heart of things and leading others to do the same.  As a Music Teacher she inspires students to give their utmost, to reach into themselves and become the music, to share the pathos or joy, the rhythm and energy, the beauty and precision that brings the piece to life.  I have seen no one else able to take students to this place of total immersion, total commitment.” – Gary Griffith

Janet’s holistic approach to music education lays a foundation for a life-long love of music.   By giving a student space to be themselves, respect and non-judgement Janet fosters their authenticity, integrity, confidence, creativity and musicality.  Students and parents  have reported that the benefits of this approach to music education extend far beyond the music lessons.  Working at a holistic level incorporates a balance between the physical, emotional, mental and spiritual aspects of a person.  The lessons help students to connect to their inner life and to know what they need for their well being.      In an age when people are experiencing increasing disconnection and heightened levels of physical, emotional, mental and sensory overstimulation, a holistic approach to music fosters awareness and balance.

Prospective students are welcome for a free Piano or Singing lesson, or a Sound Play or Sound Art session.

Using acoustic instruments from around the world, children as young as 3 years of age explore sound (Sound Play) and create sound sculptures (Sound Art) in addition to observing Cymatics, which is defined as sound made visible. They also improvise and create their own music.  This active sound and music making develops listening, awareness, creativity and skills that are fundamental to musicianship, in addition to the benefits of improved focus and concentration, calmness, confidence and well-being.

Students have claimed that Sound Art and Sound Play have helped them to be more inspired and creative, centered and happy.    As children tune-in to the soundscape they relax and feel more in-tune with themselves and the world around them.  In the following testimonials students, parents and educators have expressed their experiences of individual and group sessions:-

“These sessions have been inspirational and have had a huge influence upon me.   When I take the creative aspects into my musical life, I open up.  Not only have I noticed a change in my music, but my teachers have as well.  My perception of music has completely changed.   Now I am inventive with my music, making me an individual.  The creative play is truly a gift.   Thanks, Matisse.”

“The sessions were very calming for me.  I could play on instruments the way I liked and it opened me up to so many instruments that I have never seen before.  I came away feeling relaxed and happy.  The vibrations moved me very deeply.”  Athena

“It is unique and it offers serenity.  If I come tired or mentally confused I always feel rejuvenated after coming.” Avery

“I think these sessions will help me in life, make it so I have more choices, and help me come up with ideas.” Erika

“It made me feel very centered.”  Darren

“I felt happy and connected with the people around me and with the earth itself.”

“It opened me up to more instruments.   I felt so free in what I was doing.  Also I see more in nature and notice the patterns.  I want to be a writer when I grow up.  This course is the best thing that has happened in my education.”  Misha

“What I love about CAMM is that I can hear myself think.  Sometimes I need silence to be inspired and I found that here.”  Chloe

“Sound Art is really fun!!!! You get to build sound sculptures and see, feel and hear things that you’ve never heard before.”  Sam

Testimonials from adult participants and educators:

“Over the past four weeks that you have been working with our children at Kauri Park School I have been amazed at the enthusiasm and interest our children and teachers have shown toward Sound Art.”  Pam King – Principal (2012)

“I want to sincerely thank you for all you have done for my class in particular with one boy.  At the start of the year he was loud, disruptive and seemed to have an inability to listen without distraction.  Since starting your Sound Art sessions our disruptive child has shown marked improvement in all areas of school…He is patient, more caring and focused during lessons, and most certainly less disruptive.   In fact, I would go so far as to say that he is developing into a child that is an utter pleasure to have in the classroom, and that I envisage becoming a leader in the school when he is older.  I believe that he had not yet learned how to listen and that during your Sound Art sessions, he has developed this ability so swiftly that it has taken me by surprise.”  Amber Durling – Teacher Kauri Park School (2012)

We have many visiting musical performers throughout the year as part of our Assembly Performance Programme.  Your presentation is very different to anything that we have ever had.  You are a very skilled teacher and our teachers were impressed by the way you challenged the students to create music, be who they are and not feel that they needed to conform to the traditional boundaries of music.        It was an opportunity that our students thoroughly enjoyed.  Your message about the power of intentionally listening to the instruments, using the available space and watching the way we each interact with our instrument was really interesting.

My 2 son’s (8 and 6 years old) have been taking lessons from Janet for almost a year now. Both my boys are inspired to love music after each lesson. Janet’s approach to teaching music is holistic and fun. We currently live on the North Shore, and have followed Janet to her new studio, as I was finding it difficult to find a teacher with same music values and enthusiasm locally. A very special teacher, one in a million.

Our daughter, Jes (10 years old), has been taking piano lessons with Janet for some two to three years now. During this time we have been thrilled to see Jes’s progress on the piano and how much she enjoys her lessons with Janet. We live on the North Shore and until just recently were very close to Janet’s studio. When we heard that Janet was moving to Taupaki, there was no question that we would follow her there. Janet is an exceptional music teacher. What we find truly special about her is her authenticity in really getting to know Jes, what makes her tick and exactly what she needs so as to create her own unique and special music journey. Janet is patient and encouraging with Jes. Janet recognises Jes’s creative side and nurtures her desire to experiment while at the same time encouraging her to keep up her skills practice. Jes wouldn’t miss her lessons with Janet for the world.

Janet has been nothing but amazing throughout the several years I've had her as my teacher. She has pushed me to the best of my abilities and has always treated me with such kindness and patience. She's helped me grow not only as a musician but also as a person, and I wouldn't be where I am without her.

Janet is a wonderful teacher. She has a rare ability to tap into exactly what speaks to each of her students, individualising her lessons while never omitting the more formal aspects of musicianship. A consummate professional who is also endlessly patient, good-humoured and kind, she never loses sight of the bigger picture, ensuring that music will never be a chore for her students, but will instead remain a life-long joy. I am so grateful for what she has given my daughter. - Sally Sutton

Starting to learn the piano as a 32-year-old was quite daunting. After researching thoroughly for a good teacher and guide, I was lucky to find Janet. With her, I was able to receive the inspiration, encouragement and a sense of responsibility for learning. Janet is patient, creative and knowledgeable. She has a lovely attitude and an uplifting personality. These are really helpful and stimulated me to learn, practice and push myself to be better. I am really thankful to Janet for her time and patience with me.

It is with great pleasure that I write this letter of recommendation for Janet Dudney. She is a natural teacher with a remarkable ability to win respect and cooperation from all kinds of children. They follow her lead because they want to, and where she leads them is invariably to higher ground. One may ask how she does it. I believe the answer to that is to be found in who she is as a person - her character, her love of her subject, and her love and respect for her students.

Lee Pope, parent of a student and class teacher, 2008.