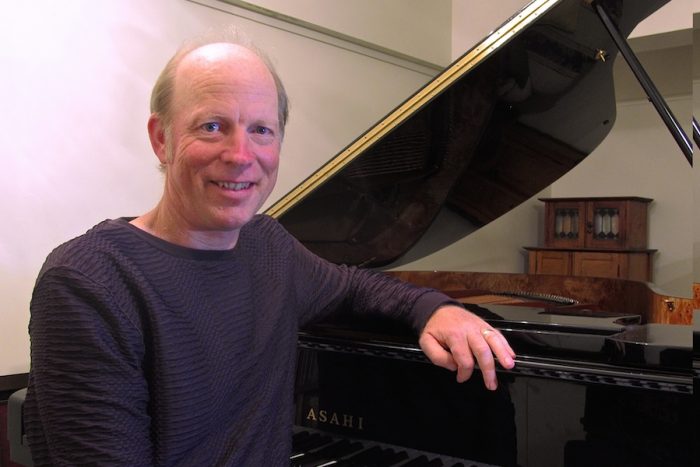 Hello, my name is Andrew Portman. I started classical piano lessons at the age of 9. My teacher, Mrs Oatridge, took me as far as grade 5 with ABRSM exams. One question she asked me was, “What would you like to do when you’ve learnt the piano?” I replied, “To play on a cruise ship!” (That answer came true 19 years later, playing piano onboard a cruise ship bound for Antarctica!)

At 16, my second piano teacher, Shirley George, advanced my music education further, to include exams with Trinity College from grades 6 to ATCL. Performing in public and entering competitions, were a regular part of my music education. I also attended master classes with Michael Houstoun, held at St Peter’s school in Cambridge, in the early 80’s.

After my formal classical tuition ended in 1983, I continued my musical journey by learning to improvise, i.e. playing piano without any written music. This was all self guided and utilised all I had learnt from my classical beginnings. I joined a music team at a Church in Auckland, in 1988. There was no written music, nor chord charts to follow, so we had to rely on the worship (music) leader for musical direction. This developed my aural skills, as well as playing in a band environment.

In 1989 I was accepted by World Vision to play keyboard for American singer/songwriter guitarist Barry McGuire, and go on a 20 concert tour of New Zealand.  The highlight of that tour was working with primary school children who sang in a choir as a part of each concert. In 1990 I enrolled with Bible College of NZ for a 3 year course in Pastoral Ministry. In my second year there, I led a music team for one year, which involved conducting, playing piano, arranging parts for woodwind and strings, and preparing a music team for the end year graduation ceremony. I also taught informal piano lessons. Also in that time, I joined a band that went touring to different Churches in Auckland, including a concert/chapel service at an Auckland prison.

From 1996 until now I have been developing jazz infused improvising, as well as classical improvising and composing. I have also accompanied other teachers’ students for exams. Piano duet playing with my wife is another musical skill that brings enjoyment to us both. For the past 20 years my wife and I both play piano/keyboard in the music team at our Church in Auckland CBD.

I enrolled with IRMTNZ in 2016 to do the Foundations Course for becoming a registered music teacher. This organisation provides ongoing teacher support and training to keep us up to date with teaching practices and principles, including enriching and varied  professional development courses, workshops and seminars. This is a necessary step for  this next phase of my musical journey; passing on to students the knowledge and experiences I’ve picked up along the way, so that they can begin their journey of musical discovery.

I believe in providing dynamic piano lesson experiences, delivered with my own unique blend of fun, creativity and passion. My desire is to impart my knowledge of music to the next generation of musicians. I would like to expand your musical horizons and cultivate creativity through improvisation and composition. I understand that learning piano is a two way relationship, so that whatever the student brings into my studio, is what I will shape and mould to help their musicianship grow.

My approach with each student is to cover the core principles of music; Rhythm-the thing that gets your toes tapping. Harmony-think of your ten fingers as a ten voice choir. Melody-that catchy tune that stays with you after the lesson is over. Theory-understanding the language of music. Technique-helping your hands and fingers to move easily around the piano to make music. Aural-being able to play what you hear. Sight reading-playing something new as if you already knew it.

Lessons are individually tailored to the student’s own learning style. I use tutor books as well as individual pieces, or music that we create from scratch in the lesson. Fun games and activities are used to help solidify musical concepts.

My ambition is to make music your friend for life.

One aim for my studio, is to foster the art of playing music through practice; the more you play what you love, the more you’ll love what you play.