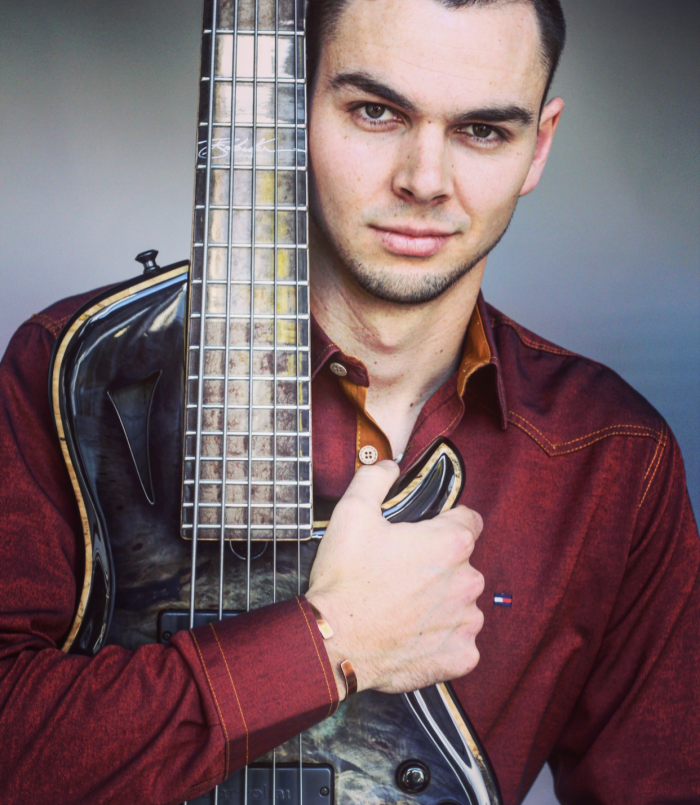 Nick is a strong musician and talented bass player who started playing music at the age of five on guitar and piano. He has been heavily involved with music since then. He studied at the New Zealand School of Music, where he graduated with a Bachelor of Music Degree specialising in Jazz Performance on electric bass, upright bass and trombone. Since graduation, Nick has been associated with international bands such as the Andrea Lisa Band, Tahuna Breaks, dDub and the Rodger Fox Big Band. He has also been a member of the Auckland Jazz Orchestra, Queen City Big Band and the New Zealand School of Music Big Band.
Over the years, Nick has performed with some of New Zealand’s finest jazz musicians, such as Rodger Fox, Ray Wolf, Erna Ferry, Alan Brown, Phil Broadhurst and Kevin Field to name a few. He has also performed with international Jazz artists Allen Vizzutti, John Fedchock, Steve Houghton, Thijs Van Leer (Focus) and Kym Perling to name a few.
Nick has performed at many festivals throughout Australia and New Zealand, such as the Coloundra Music Festival and Poly Festival in Australia, the New Zealand National Jazz and Blues Festival, The Nelson Jazz Festival, Mission Bay Jazz and Blues Streetfest, Auckland Music in the Parks in New Zealand. He also performed at the Fiji Jazz Festival in 2011.
Relocating to Australia beginning of 2012, he performed at several venues in Sydney, Brisbane, Melbourne and Perth. In February 2012, he had the privilege of being part of the supporting act for Grammy Nominated artist Jonathan Butler.
Over the past seven years he has been touring the world primarily with recording artist Andrea Lisa. During this time he has completed many performance contracts on board the Luxury Celebrity Cruises all around the Mediterranean, Caribbean and South Pacific. 6 months in Dubai at one of the top 5 star hotels The Westin Mina Seyahi. Performing in the South of France at The Royal Mougins Golf Resort, Le Moulin De Mougins and the home of the late Pablo Picasso. In 2017 performing on the Smooth Jazz, Blue Note at Sea and the Soultrain Cruises.
Recently he has recorded with original founding member of Kool and the Gang, George ‘Funky’ Brown. Also with Louis Van Taylor, saxaphone player from Kool and the Gang and Billboard top 40 artist ‘Chelsea’.

I like to focus on what the student really enjoys and continue on that path. Taking the genre and tunes they enjoy and improving all musical aspects from: